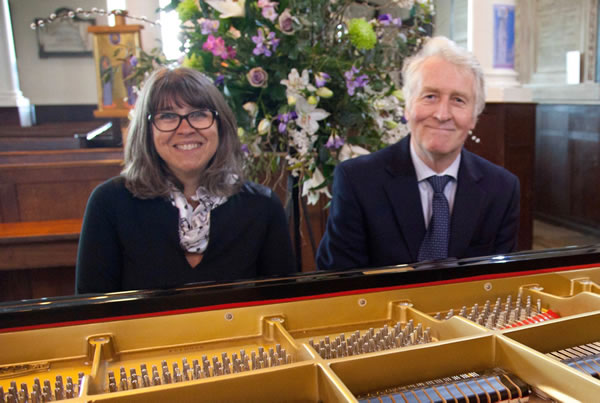 Gill & Richard began playing piano duos in 2015, since when they have performed regularly in Shropshire and Worcestershire, covering most of the major repertoire.

Gill was born in West Yorkshire. She attended Huddersfield School of Music where she studied piano with Ruth Ramsden, bassoon with Maurice Ashworth and voice with Eileen MaHhews. Gill went on to study music at Goldsmiths’ College, University of London. Since graduating, Gill has enjoyed working with singers and post grade eight students for performances and examinations, as well as singing in a number of local choirs. Gill currently works as a Year Two teacher at Shrewsbury High Prep. School and is responsible for teaching music in both the Foundation Stage, and Key Stage One. Other musical activities include running a Pre-Prep Choir, taking a Pre-Prep percussion group and learning to play the ukulele alongside the children in the Pre-Prep Ukulele Players (Little PUPs).

Richard moved to Shropshire in 2005, having been Director of Music at Harrow School for the previous 20 years. He has been involved with the Arts Festival since 2005, and is currently organising the free morning concerts. He is Assistant Director of Music at St Chad’s Church, Shrewsbury, conductor of the Phoenix Singers of Shrewsbury and plays double bass in the Shrewsbury and Ludlow Orchestras. Richard studied music at Cambridge University, and his teaching career began in Edinburgh, followed by five years at the Leys School, Cambridge before his final destination at Harrow School.

Admission is free, with a retiring collection at the end of the concert.
Berry’s Coffee House will provide tea, coffee and home-made biscuits after the concert, with proceeds going to Mayfair.
The full programme is available as a PDF here
Sorry, no more tickets available
Update Basket
Cancel
Membership

Members benefit from possible discounts (10% for ticket purchases of £50 or more, excluding workshops) and/or seat reservations (where applicable).

If you are an existing member please verify yourself now, to receive membership benefits. If you are not a member you may wish to purchase membership now.

If you were a member in 2018 and wish to renew for 2019, please select the first option and refer to your letter from Gloria.

Please choose from the following 4 options (if you can't see this complete box, please Click Here to hide this text):

You will find your membership number and security code in a letter or email from us; if you cannot find it, please contact Gloria Carter for assistance.
Sorry, verification failed. If you have no success, please contact Gloria Carter.
You have been verified as a member, but you have not yet renewed for 2019. If you want to renew your membership, please Click Here. (This will add £ to your basket.)
Click to Verify

No Thanks, I'll just buy tickets

OK
(You can change this choice later)